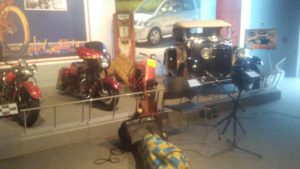 My work space for the day.

I was invited back to the America on Wheels Museum in Allentown for another holiday music gathering. Last year was pretty busy and I was expecting the same. As 11:30 rolled around there were two families in front of me, one was grandparents with two young boys (one very, very shy) and the other two parents with a precocious 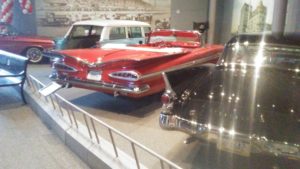 sister and a younger brother. I opened up the bag and we started.

The brother/sister duo got into the bag of puppets, etc. and, unfortunately, spent more time playing with the instruments than engaging with the music. The parents were grateful but eventually left halfway through. The grandparents and their boys were a different story. The older boy broke out of his shyness when we sang Here Comes Santa Claus and became delightfully engaged while his little brother danced and clapped. I asked the older brother if he could sing a song and he chirped up Mockingbird and started right in. I had him sing into the mike and he was great! They stayed for the whole set.

One Latino family stopped by so I got out the Thunder Tubes for Giants and both the sister and the two brothers launched in with gusto. Then they left. 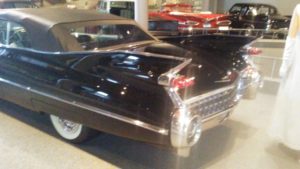 It was a slightly disappointing gig, but I’m there for the small interactions that I had with the individual kids. I was paid well and got to tour the museum’s Fins of the Fifties gallery, chat with one of the gentlemen curating the exhibit. Not too bad for a rainy holiday Saturday. 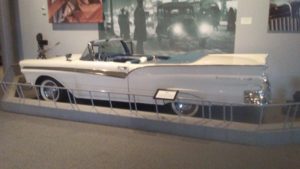