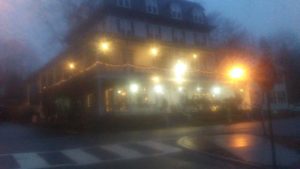 A rainy, foggy night at the Deer Head.

I was particularly interested in visiting the Deer Head, a legendary jazz club in the Water Gap. Godfrey’s and the Deer Head have been linked as the major listening clubs in Eastern PA and I finally had the chance to see it in person and perform on its stage.

I headed over to a meet and greet at an old building across the street from the club, introduced myself to the folks putting on the show, munched on spicy meatballs and eventually headed over to the club for the 5 pm show. As I wander about the bar room, there were black and white photos of some jazz greats, many of whom I don’t recognize, though there was a wonderful caricature of the late Bob Dorough in the men’s john.

There was a full house for this 10th year of the benefit and, amazingly the audience was remarkably quiet per its reputation. Marty played some fine acoustic instrumentals and George did a jazz rendition of The Night Before Christmas backed by the Bovine’s. I was up next for my 25 minute set.

Mel, the emcee introduced me by referring to her daughters running my Baby Shark incessantly in their home. That was a surprising connection there. When she remarked that I founded Godfrey Daniels, there was, again, a very nice cheer from the audience, especially being so much out of my home area. Folks knew and I felt gratified.

I hit the ground running with Don’t Call Me Early in the Morning and it got people’s attention. I told the crowd how proud I was to be playing on this stage. I followed with Santa Assassin which set up the rest of the set with my edgy humor. I pulled out Zat You, Santa Claus next and got the audience to “zat you” along with me after chiding them on their “is that you” response, mocking their whiteness. Again, it’s a good way to poke the audience. I did Lessons from Pete to establish my songwriting cred and it provided a serious and personal note to the set. I finished with Cockburn’s Mary Had a Baby, a driving and relatively unfamiliar Christmas tune.

It was a particularly strong set in front of a large, listening, hip audience. It felt really good to make a statement on this famous stage.

As I hung out for the next hour or so, I had several conversations with folks, thanking me for my set, my guitar playing, their personal Pete connections, my performance abilities, etc. I even sold a CD!

I also had the chance to meet the current owners of the Deer Head and we shared our mutual respect for each other, obviously aware of each other’s spot on the PA music scene. I expressed my thrill to be able to play here.

I eventually packed up to head back to Bethlehem after a long afternoon and early evening. I said my thanks to my fellow performers and drove back down from the Poconos in a foggy rain. I was feeling good about the whole trip all the way home.