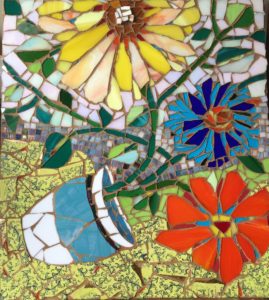 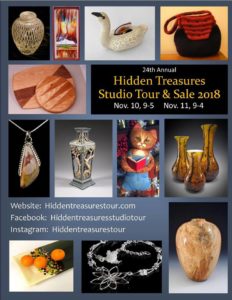 I always look forward to playing in Barbara’s living room among several artisans. Barbara had her magnificent sculptures, miniature houses, mosaics and fancy ladies in her dining room while a glass artist Nancy Napolitano and and multi-mix gadfly Linda Kondikoff had soap, earrings and other jewelry and some interesting dangly things. Linda’s been here before and I have a sparkly thingamabob as a suncatcher in front window.

I settled in my usual spot in the stairwell (great acoustics) and started in at noon. There weren’t a lot of folks early on, and, overall, not as many over the weekend as in the past. Barbara mentioned that a lot of art buyers are now down-sizing, while others have very small living spaces. (I, myself, am running out of wall space for my Kozero’s, Christine’s, Wilsons, Ruhf’s, Weber’s and Fry’s….) 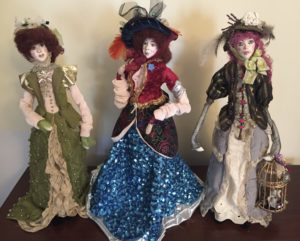 I had only Nancy, Linda and myself as an audience so the pressure was on. I had to hit the ground running. These gigs really make me listen to the guitar sound, remember the words and play as clean as I can. Sometimes there’s too much information going on and I screw up on at least one of these areas. But, I take mental notes on where I have to go back and woodshed on the songs. The ladies, though, really appreciate the music and don’t notice most of what I hear as less than what it could be.

I played some mandolin tunes and Linda said, “Did I hear Cunnla?” I did a double-take since it’s a pretty rare tune from way back in my repertoire. One of my early Celtic influences is Planxty and I took several tunes from an early album, including Cunnla. Linda actually gave me some history on the tune and said she saw the band on tour at Kutztown in the 70’s. Damn! Small world among this artist class.

During the afternoon, I noticed a rainbow on my left hand as I was playing. I thought this was quite appropriate, considering the situation. Linda noticed and got out her phone and snapped a couple of pix – album cover material! We all take note of the moment and celebrate it. That’s how our minds work. 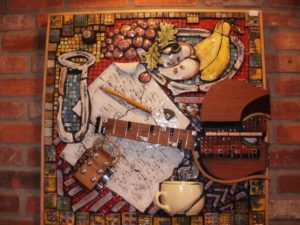 Kozero mosaic – in my collection

The hours sped by, packed up and chatted with my good and long-time friend Barbara, bought a few things from Nancy and Linda, exchanged CDs for some small art stuff. I bought a dangly sparkly whatsit for my back window. I sold a CD, practised for three hours and hung out with some cool women. That’s a pretty good Sunday afternoon for me.