School gigs are fairly rare in the fall, but we had a surprisingly good one on Friday. This was  listed as a charter school, but I didn’t realize it was the oldest Quaker school in the country, founded in 1689 founded by THE William Penn. 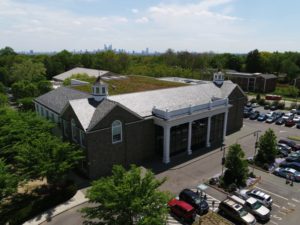 We were ushered into Kurtz Center for the Performing Arts, a $14 million facility with a ‘vegetative roof’ and a spectacular auditorium, not our usual all-purpose room set up. We got set up, did the lights and waited for the kids to come in at 2 pm. Apparently we were lucky to play in this space. We were originally scheduled to play in the old assembly hall, second floor of the old school building but something was already booked for the afternoon. Yay! We don’t do stairs and equipment well anymore.

One class came in early so I walked down to chat with them. I asked if they knew any dances and, of course, The Floss, The Hype and Orange Justice came up right away. Soon they were all out of their seats and dancing. I asked if they knew The Twist, and the teacher laughter. Of course not. It was a great pre-show warm up for these kids. 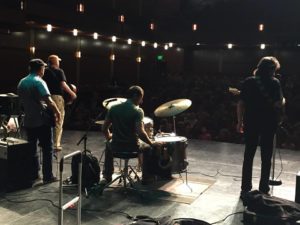 Eventually the rest of the kids and teachers filed in and filled up  250 seats. Since it was a Quaker school, Mrs. Lea, our contact for the gig, said that there should be no mention of violence and that they would start off with a moment of silence. It was a remarkable moment and actually set the kids up for returning to a respectful quiet after some of the more raucous moments of the show. 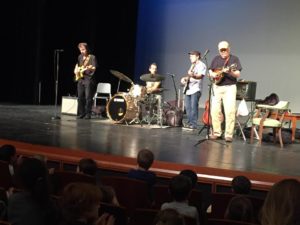 It was a Friday afternoon and we were given a strict 40 minute window for the show. We’re used to keeping an eye on the clock and we ended up shortening the show by about 10 minutes, which was fine. 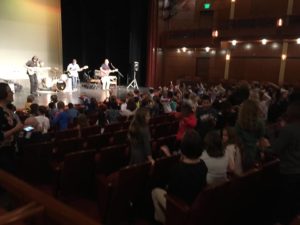 The kids were really active and respectful, often getting up and dancing spontaneously. I could see that the teachers were having a great time, delighted with the show and the response from the kids. We played really well and we looked great on this professional stage.

We got a great quote from the assembly coordinator: “It was totally awesome. We were thrilled. Everybody loved it, from the youngest students to the most jaded faculty!… RockRoots was really fabulous. They were great with the kids, the music was excellent caliber, they were good natured. I’m always pleased with YA programs but this one was really a stand out.”