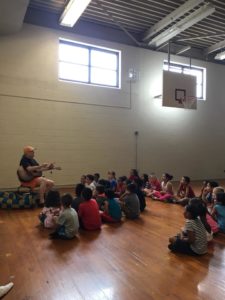 An interesting day as I wrapped up my 12 Allentown schools for the summer with a 9 am set for the Dodd ES kids and a 10:30 set at Jefferson ES.

The Dodd show was in a small gym with an incredible echo and I used that to center the kids on the first song I Like Peanut Butter. It was a creative bunch of kids, for the most part but the several kids were pulled out at a time (testing?) over the set so those kids had to reset when they came back. They came up with a good Bear Hunt (Chucky Cheese – yelling and screaming – (hmmm, “pizza!”, munch, gulp!) verse and the All Around the Kitchen was again a great vehicle to finish out the show.

There was a telling situation during the session. The teachers were rather chatty off to the side while I was playing. I noticed that the kids and myself were distracted a little, so I asked the teachers to be quiet. They settled in, but, as I looked over shortly thereafter, I noticed they all had dived into their cell phones. Nuts. Not involved with the process.

I headed over to Jefferson ES, a more inner city school and there were more teachers and they remained a part of the action. Again, these kids were engaged and responsive. I noticed several young ones were not as involved as I would like, but during the show, they had moments of participation which I celebrated with the teachers.

As I found out later, some of these kids were pre-K kids, heading into their first year of school in September. The teacher was pleased that the kids were getting this experience as an initiation to learning how to listen, follow instructions and have some fun, too. That was a valuable reflection for me.

The Bear Hunt was fun: The Pool – wet and slippery – (swim “splash”, go underwater “blub, blub”, “dinosaur in the pool!” splash, splash). One young lad had been insistent on adding “dinosaur” to anything I was doing so this was a great time to add a dinosaur to the proceedings. It was a nice nod to his creativity and the other kids loved it.

This was one of the better sessions I’ve done, thanks to the kids and teachers. I told them so.

The whole series was a chance for me to work on some techniques – especially with  recurring themes (Bear Hunt, All Around the Kitchen), the opportunity to pass these songs around the larger school district community (the teachers loved this idea) and the reflection time at the end of each show – a chance to have the kids take time to think about what we did. That’s really important – something I do with these blogs. It’s how we re enforce what we do as learning, creative beings.