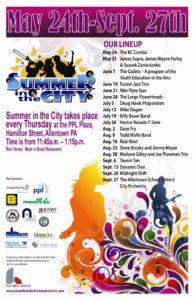 I usually get one of these downtown Allentown gigs a summer and I believe I’m the only solo act. Ostensibly they book me as a kids performer but I really like to stretch the boundaries with my adult stuff.

It was a hot but not unbearable day on the PP&L Plaza with a surprising wind whipping around. In fact the pop-up tent nearly took off before I started. I grabbed my guitar while several alert folks came up and held the stakes down until a few more cement blocks were found. Danger in the city!

There were a few familiar faces there at the beginning and was able to exercise some of my general folk/rock tunes. My friend Dancing Pat showed up (she normally frequents more R&R events) and I was glad to feed off her energy. Some friends’ grandson was in town, a DF fan, and he supplied some of his manic energy, too. In fact, Pat and Charlie worked off each other and the crowd dug it. 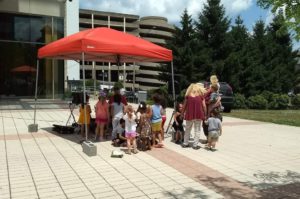 Later on, the kids and staff from the Montessori school a block away came over and I had to change direction and aim my material towards them. That’s fine because it’s still great theater for the other folks, and the city promoters particularly like it, snapping photos, etc. for their purposes. As they eventually crowded under the small tent with me, it got a little hairy and up close. My focus shrunk to the 10 feet around me. 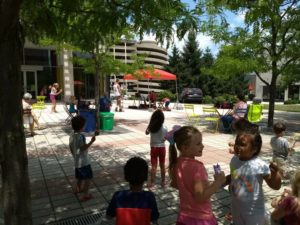 I was hoping to work on my adult stuff some more, but them’s the breaks. The time went quickly, the Chamber of Commerce folks loved it and I got to work my skills on several levels.