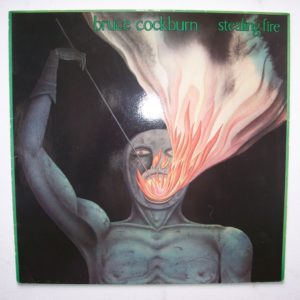 Day One. With some downtime on my hands, I’ll share some of the essential albums that wore out. Stealing Fire by Bruce Cockburn.

Always a fan of Bruce Cockburn’s spirituality, this one came from his activist days in Central America. If I had a Rocket Launcher stunned me with its first-person account of the political realities of our age, but the overall production and songwriting on the album was breathtaking.

Day Two: Fotheringay. With deep connections with Fairport Convention, this album was the best of English folk rock for me. Sandy Dennis’s originals and superb vocals, Trevor Lucas’s rich voice (husband of Sandy) and Jerry Donahue’s bendy electric guitar were unlike many other English trad-rock bands like Steeleye Span and Fairport. Short shelf life for this band.

Day Three: Will the Circle Be Unbroken. 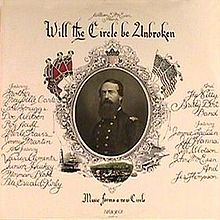 As a young aspiring folkie, my friends and I ate up this three album set that featured the Nitty Gritty Dirt Band (a band of CO long hairs) and some of the legendary country music icons. The conversations between them (and surprising mutual respect, in both directions) was part of the lure of the live sessions. Mother Maybelle Carter, Doc Watson, Earl Scruggs, Merle Travis, Roy Acuff and more. We were introduced to Vassar Clements, Norman Blake, and Randy Scruggs finished up the album with a breath-taking version of Both Sides Now on acoustic guitar.

It was a great nod to Old School Country, which, at the time was being ignored by Slick Nashville Country, and it took a cruffy country rock band to pull it off. And we got to be the proverbial “fly on the wall” for the sessions.

I have always been drawn to the power of folk music to span the generations and bring us all together. Simple but true. 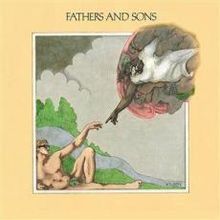 Day Four: Fathers and Sons. In the same spirit as yesterday’s Will The Circle post, this album featured the old and the new players, this time from the Chicago blues scene: iconic Muddy Waters (and Otis Spann) and the young turks from the Paul Butterfield Blues Band (Paul, Mike Bloomfield, Duck Dunn). Two albums – one studio and then an incredible live concert set. I was blown away by Muddy’s incredible performance (vocals, guitar and command) and the reaction of the audience. Again, the palpable mutual respect between generations made this a critical part of my musical heritage. 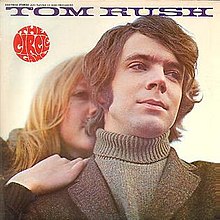 Day Five from Dave Fry: Tom Rush’s The Circle Game. It was an experimental album for Tom who was, at the time, a leading folk/blues revivalist with great acoustic guitar, vocal and performance chops. He wanted to explore contemporary songwriting, including his own work. He featured three emerging writers – Joni Mitchell, James Taylor and Jackson Brown, relative unknowns at the time. The Urge for Going, Something in the Way She Moves, The Circle Game as well as his own No Regrets moved him into an elite group of new folk artists. There were a few pop fizzles on the album (including the album cover), but it was a dramatic move on his part and got my attention. 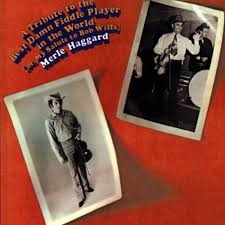 Day Six: Merle Haggard’s Tribute to the Best Damn Fiddle Player in the World. Gathering six of Bob Wills’ remaining Texas Playboys and his Strangers, Merle helped re-establish Western Swing as the respectable country cousin of Big Band Swing, leading to bands like Asleep at the Wheel and, further on down the food chain, Steppin’ Out!. 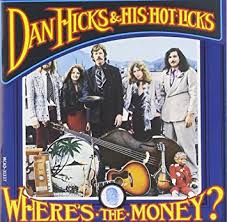 Day Seven: Dan Hicks Where’s the Money? Dan’s music and attitude was a perfect match for me. Quirky songs, tight acoustic arrangements (big band boiled down to its essence) and a laconic sense of humor and style. It was a dream come true to have him play at Godfrey’s many times and his songs still haunt my repertoire.

Day Eight: Bob Dylan’s Highway 61 Revisited. Finally, Dylan had a rhythm section that captured the chaos of the times with electric instruments and Mike Bloomfield on guitar, Al Kooper on organ, Harvey Brooks on bass and more. Dylan on piano. 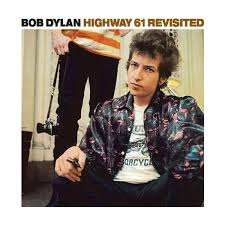 Like a Rolling Stone is a masterpiece as the band builds the tune brick by brick, letting the song reach it’s devastating climax. Tremendous restraint. But the final tune, Desolation Row was done as the sole acoustic cut of the album butdelivered with the same intensity. 11 minutes!

Great tunes and a loose band: Just Like Tom Thumb’s Blues (compare to Pancho and Lefty), It Takes a Lot to Laugh, It Takes a Train to Cry (one I still love to play), Queen Jane Approximately, Highway 61 Revisited, From a Buick 6 – all iconic tunes.

This album crept up on me and still resonates deeply. I like the fact that Highway 61 connects his hometown of Duluth and the blues-rich New Orleans area. He recorded this before and after his revolutionary set at Newport in ’64.

Day Nine: Mr. Bojangles by Jerry Jeff Walker. Just out of high school, my friend Dennis Mike introduced me to Caffe Lena, acoustic music and this album. At the time, I was wrapped up in Stones, Beatles, etc. like most of my friends, but this album opened up my ears in several ways.

Jerry Jeff’s songs were always well-crafted (time for me to brush off Bojangles again…), delivered with a fine baritone voice and simple acoustic trimmings. But something stuck out in the arrangements – lo and behold, I heard acoustic guitar leads (whodathunk?!). And they were done by this skinny kid from NYC, David Bromberg. The veil was lifted. 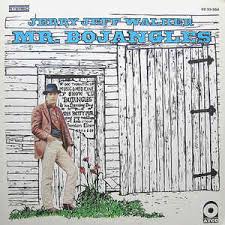 I quickly added Little Bird and Maybe Mexico (the opening cut) to my repertoire, followed by many of his Luckenbach Texas country rockers later on with Steppin’ Out!

In my Band Aid Concert in 2013, David (and John Gorka) graciously headlined this benefit concert for me. I remain deeply touched by the response from my community and especially form David and John. I opened the show and asked David to back me up on Maybe Mexico. Full Circle.

Tenth and final day: Where Have All the Flowers Gone – The Songs of Pete Seeger. I’ve concentrated this series focusing on the music that shaped my musical tastes pre-Godfrey’s and I’m particularly glad to see my friends salute the folks who have played the club. 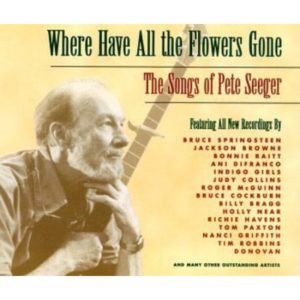 I’m finishing up this curious task with a fairly new collection of Pete Seeger’s vast treasury of his original songs performed by contemporary folks who have picked up his mantel, so to speak., including our own Anne Hills and John Gorka as well as Guy Clark, Kim and Reggie Harris, Tony Trischka and many other who are Godfrey’s regulars.

Bonnie Raitt, Jackson Browne, Bruce Cockburn, Springsteen, Holly Near, Richie Haven plus other surprising guests tip their hat to this seminal American folk singer and songwriter. And Pete himself finishes the collection. The breadth and depth of the material is genuinely astounding.

I hope to digest this whole process sometime on my blog. Phew…