Per usual, these nights are exceptional evenings of good music and talk. Tonight featured two fine New Jersey songwriters who have been in the Godfrey’s orbit for many years. Bill Hall, of course, has been in attendance at our open mike for years, and is a regular over the last 5 years. Gregg Cagno was a frequent visitor in the eighties  but is a rare show nowadays. It was a delight to pair them together tonight.

Gregg was a founding member of Camp Hoboken, a songwriting group in the 80’s and remains an accomplished songwriter. He pulled out some gems tonight, including some nice reflections on middle age (Living in the Middle Ages) and a great take on writing pop love songs (The Part That Repeats). Clever, clever, clever. 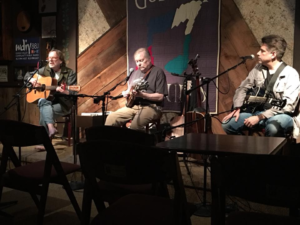 Bill’s repertoire is more familiar but he’s written some wonderful songs as well. He did his classic Rosie is a Friend of Mind, Going Out Tonight and The Gypsy and the Lady. I got some nice takes on these songs and look forward to sharing them on the radio.

I pulled out Smoking Babies as well as We Are Welcomed and Step By Step for practice for Saturday’s No Place for Hate benefit at Godfrey’s.

We had some good chat about playing for non-listening audiences (I take it as a challenge) and good ole Jersey songwriting.

There were (again) a handful of folks in the audience but several came up after the show and thanked me for providing this concept for our Godfrey’s audience. True dat!