My long-time friend Tom Church has invited me to join him and some of his friends, collectively called the Raw Magic Band, for an annual house concert and benefit for the UU Church of the Lehigh Valley. I used to attend this church back when my family was young and enjoyed the folks that attended. Tom performed quite a bit back in the 70’s and had an album out on Fretless Records, a small but respected folk label in New England. He doesn’t play professionally any more. The Church family also has deep roots in Bethlehem’s history. Brother Danny wrote for the Globe Times here in Bethlehem back when Godfrey’s was very young and his wife Peggy is a good friend, as well. 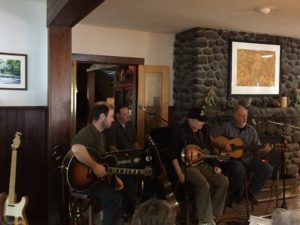 From last year’s house concert with Paul, Dan, myself and Tom

At his house along the Delaware River, Tom and his wife Sheila gather some of their friends for the affair. Last year I got to meet and play with pianist Dan DeChellis and Paul Thiessen. Dan and I hit it off immediately and I eventually persuaded him to play on my new CD. He teaches at Moravian College, did a great job in the studio and has wonderful improvisational chops. Tom knows a passel of songs and has written some gems as well. This year Tom added a mandolinist Bud Burroughs from the Lansdale area. He is no slouch either. He’s really good.

This year, I didn’t work out material ahead of time with Tom but we agreed that we trusted that we would do well together as a quartet. Tom knew that we are all listeners first and can find our space as the songs develop. It worked and the process turns out to be something that the audience enjoys

It’s a rare chance for Tom to break out his songs and front a group. I particularly enjoy these situations as a side man on guitar and mandolin. And since Bud was on mandolin, I had the choice of playing guitar or second mandolin, both of which remain a challenge for me. We tentatively played the first song, got our ears up, felt around for who plays what lead, etc. By the next song, we were a combo. It was fun to do dual mandolin songs; I found that his hot licks go well with my chordal chops.

I found my spot as the band commentator, as usual, and was able to engage the audience with observations, bon mots, etc. I took time to thank the guys, saying that it’s a real pleasure to play with other musicians who have their “antennae” up, and that we were having a grand ole time. I know the folks gathered in the living room agreed.

Snacks prevailed, with lots of exotic cheeses spread throughout the house. Lots of grazing. I did mention that, for a UU gathering, there was lots of Cheeses (Jesus) present. That cracked up Dan and the folks in the room. If I can get the band to laugh, I’m a happy camper.

I get to front two songs, one in each set, so I did False from True which worked out well as a blues jam piece but folks also reacted to Pete’s lyrics as well, especially among these liberal UU’s.  I did Lessons from Pete in the second set and it turned out to be a remarkable performance piece. The lyrics are powerful but the open jam at the end was special. Again, the band and the audience realized that this afternoon was unique. Tom rose to the occasion with his songs and we were all tickled by the end of the “show” with our version of Get Together. A very satisfying session. Folks said we should play Godfrey’s. That’s a nice compliment.

I couldn’t ask for a nice way to spend a Sunday afternoon in March.