I was asked to return again to PP&L Plaza for Allentown’s annual Tree Lighting event, as a performer and emcee. When I started about 4 pm, it was chilly and a tad windy, but not to bad. The temperature would drop into the 30s over the next two hours. 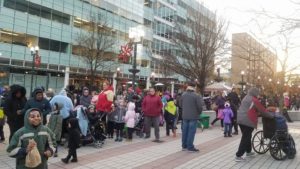 Families were lined up down the block, waiting for Santa (and the Toys for Tots’ free giveaways) so I encouraged the kids to come on up and dig into the bag of instruments, scarves, noses and hand puppets. It took a couple of kids to break free and soon, the grassy spot in front of the stage was filled with kids. Controlled chaos.

Some of the kids remembered that they came up on stage last year, so, after a while I invited them up for (appropriately) a freeze dance. It was good theater for the adults (taking cell phone shots, of course) and we filled up the time before Santa’s arrival. I chased the kids off but some kids didn’t take clue and I had turn, off mike, and tell them to scoot. I’m sure some of the instruments walked but I expected that. Still, some of the families don’t get it.

Santa arrived via fire truck and I launched into my Here Comes Santa medley, and folks settled in for the tree lighting. I was joined on the stage by Mayor Ed Pawlowski, Melvin, the Phantom’s mascot (he’s really good) and the local TV weatherman to count down for the tree lighting. There was the big build up and most of the lights went on (it worked perfectly ten minutes beforehand…). The top and bottom were lit and the vast inbetween remained dark. I made a remark that was pretty snide on my part (and really, really regret), “Welcome to Allentown.” What I thought was clever in the moment was quite foolish on my part.

The lights came on (apparently Melvin’s scooter unplugged the lights behind the stage just before he came up) and the was a nice, appreciative cheer from the crowd. I then introduced the local choral group from Dieruff HS, the Allen HS band and a local youth dance group YEA!. It was getting really cold and I applaud this kids for performing in this tough situation. But it was in front of families and friends and the energy was very nice. 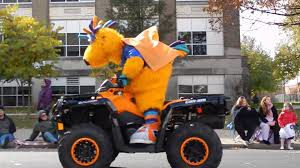 I was supposed to close things down at 6:30 with a few songs, but I didn’t think I could handle the cold at this point. I thanked folks, the community performers and we closed it down. I was still shivering an hour later.

The sobering moment occurred when my friend Miriam came up to me during the first group. She was disappointed with my comment on stage, and that someone had complained. It was then I realized the enormity of dissing Allentown with my remark, and in a most public situation, live TV…. gack…). I apologized to Mir and said I would make some positive comments later on, and I did. But, my ironic sense of humor was inappropriate, to say the least, especially since I was hired by the Allentown Chamber.

I was uneasy the rest of the night with some loss of sleep. It kind of ruined my recollection of what should have been a successful, but very cold gig. Lesson learned, once again.