I was quite warmed up from the Saucon Valley Farmers’ amarket and primed to head up to The Space in Hamden for Ron’s CD Release party. He was most gracious to invite me to do a guest set in between his sets and I was looking forward to being part of the festivities. 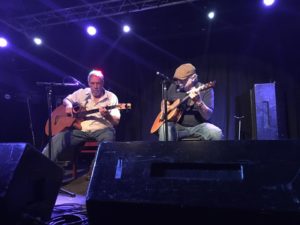 Ron and good friend/bassist Denny Collin had worked hard in putting together this CD Berkshire Serenade, a fine collection of Ron’s original tunes. He insisted in keeping things simple (though his songs are far from that….) with just bass, guitar and vocals, in line with how he plays them out in public. That’s how he rolls.

The traffic was a little bonkers (no surprise) so I got there about ten minutes before the starting time of 6 pm, but time enough to check in with Ron, Suzy and a bunch of my old cohorts from the folk scene I was a part of during my ten years living up there.

The Space Ballroom is the third extension of Steve Rogers’ noble effort to present music in this community. The Space was my initial introduction to this scene when it hosted an open mike in a relative fire trap nearby, underneath a bridge – a great counter-culture vibe that reminded me of Godfrey’s. As he expanded into an industrial park (a great move – no neighbors, tons of parking…) I often played the open mike at the new Space. When Steve got a liquor license, he opened up another building, The Other Space, for concerts for the over 18 crowd. He then expanded by developing a larger adjoining room for bigger concerts – The Space Ballroom. Big sound stage. This was my first time on this stage.

Ron and Denny launched into their first set, and as I settled in to take in their music, I was assaulted by a very noisy woman who was talking loudly at a back table. I dared to ask her to keep it down. She did, at least for ten minutes. The rest of the audience was much more polite. I am spoiled with Godfrey’s. But, it also steeled my resolve to grab folk’s attention during my set. 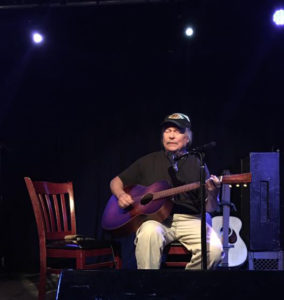 I got up on stage for my short set, I got a quick sound check from the sound guy, and launched into Don’t Call Me Early in the Morning, a request from Suzy, and a good way to get folks singing along. And, as usual, it worked well, especially when I let the crowd hear themselves as I drop out. I did chide them at first for being a New England audience in their initial hesitation (though not as bad as a Jersey audience, I added – a lie…). It set the tone for my set. I had the room in my hands.

I followed with Giants from native Nutmegger Kent Aldrich. Again, it worked well. I followed with Rosie is a Friend of Mine to a lesser success. I finished with Lessons from Pete which really connected with all. I thanked Ron for his friendship over the many years, and extended my love to my friends in the audience who were there to support Ron’s creativity. These folks made my time spent in CT worthwhile.

Ron and Denny finished out the evening with a standing ovation, and with his usual ‘aw shucks’ attitude thanked everyone for coming out. His extensive repertoire was magnificently on display tonight and I was proud to witness his craft among his many good friends and supporters.

The drive back was a bitch but I was armed with some good listening material. A long, long day from Hellertown to Hamden and back. Such is the life of a troubadour.